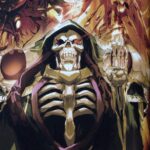 Day 50: Never and Nai narrowly escape the collapsing tunnel. In the confusion following the blast, Whitechapel charges the gatling gun shooting down the miner manning it. The miners return fire from across the underground stream and Never joins the fray coach gun booming. Nai conjures his vision of the Manticore’s spirit. Whitechapel and Never hold, driving back the dwarves across the stream. Whitechapel guns them down with the gatling gun before then can escape. Following a small mining railway, they make for the surface and find the ringleaders murdered, Kazgram Ungrask among them. Drawn by the sound of the explosion, Hexerai Xhil awaits them outside and they return to Fortune’s Bluff aboard the Blood Moon. Later at House Bellamy, Syrr Sai returns and charges Never with overseeing the extraction of orichalcum from all of the mines. On the way to the Majestic Hotel, which will serve as Never’s headquarters, Whitechapel trails behind and enters a doctor’s office through a second story window; the doctor’s daughter falls prey to the vampire’s bloodlust.

Day 52: A recalcitrant Mr. Nibbs is convinced by Never to reveal the location of his claim to be consumed in the mining operations. The talismonger Isilhloki, also called Moon Snake, is stopped by hob sentries and delivered to Whitechapel. She convinces him to take her to Never. They encounter the overseer on the way to a Mule IX intent on surveying Nibbs’ claim. Locked in the wardroom, Moon Snake convinces them to spy on the servants of the Pale Lady giving Never a strange wax tablet in a small pewter case. In return for their collusion, each is granted a draw from her Bag of Wonders.